Long Island resident Hepsie Bywater, an active grandmother of two young boys and a former airlines manager, suffered from severe arthritis and had difficulty walking, shopping and driving.  In 2006, the pain was so disabling she needed conventional hip replacement surgery and took several months to recover.  Eventually, she knew she’d need the other hip replaced, but put off the surgery as long as possible. “I couldn’t walk from the grocery store to the car without my husband’s help– it was very painful,” said Mrs. Bywater.  “I knew I had to get relief.”

In January 2009, Mrs. Bywater, 62, was referred to Paul Enker, MD, chief of the Department of Orthopedic Surgery and director of the Total Joint Replacement Program at the Queens Long Island Medical Group.  Mrs. Bywater and her husband, Raymond, were hoping that the surgery could be scheduled right away, but Dr. Enker told them about a new, less invasive hip procedure that offered a shorter recovery time.  Delaying the process was that Dr. Enker and his surgical team at Glen Cove Hospital, where he planned to perform the surgery, were waiting for delivery of a surgical table designed specifically for the new procedure.

“My husband and I were hoping that I could have the surgery right away, but after Dr. Enker explained the new hip procedure we decided it was worth the wait,” said Mrs. Bywater. On March 27, Dr. Enker performed the hip replacement on Mrs. Bywater, making it the first one for the hospital and the first in Long Island using the HANA™, or Hip and Knee Arthroplasty surgical table.

With the aid of the HANA ™ surgical table, Dr. Enker was able to replace the hip joint through a single, five-to-six inch incision, without detaching any major muscles from the pelvis or femur.  “By avoiding cutting of the major stabilizing muscles of the hip, this minimally invasive anterior, or front, hip replacement technique provides immediate stability of the hip after surgery, less bleeding, less pain and a much shorter recovery,” said Dr. Enker.  According to the latest data, hospital stays range from two to four days compared to three to10 days for conventional surgery. Recovery time is dramatically shortened from two to six weeks versus two to four months for conventional surgery.

In a conventional hip replacement surgery, a 10-to-12 inch incision is made along the thigh and buttock to gain access to the patient’s hip joint by incising stabilizing muscle connected to the pelvis and thighbone and the thick lining of the hip joint. To minimize the risk of hip dislocation following surgery, patients follow precautions for two to three months including restricted bending below the waist, sitting on low chairs, driving, crossing their legs and lying on their side. Additional requirements include the use of toilet seat extensions and foam wedges between their legs in bed. None of these precautions are necessary with the anterior approach, said Dr. Enker.

To perform the anterior approach to joint replacement, Glen Cove Hospital invested in the state-of-the-art HANA™ surgical table, which allows the surgeon to rotate the leg and joint for easier access to the hip joint during the surgery.  The table also allows for X-ray imaging during surgery in order to achieve more accurate placement of the prosthetic components and restoration of leg length equal to that of the normal leg. By being able to compare the operated hip to the non-operated hip, the incidence of the operated leg being longer or shorter than the non-operated side is minimized considerably.

“The minimally invasive hip procedure gets patients back to activities of daily living and work quicker, and with fewer restrictions,” said Dr. Enker.  “For example, patients can get in and out of a car more easily and they usually start walking without canes and walkers more quickly.”

Mrs. Bywater said her recovery from hip replacement surgery the second time around was much easier.  “After the surgery I felt alert and ready to recuperate.  I was only in the hospital three days and my pain was much less as compared to the surgery I had a few years ago.”  She also said sitting, walking and traveling were much more manageable. “I’m looking forward to getting back to my normal activities like shopping, yard work and planting flowers,” Mrs. Bywater added.  “But I’m especially looking forward to swimming in my backyard pool and bike riding with my grandsons.” 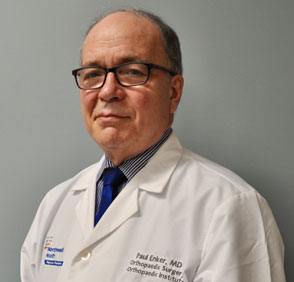